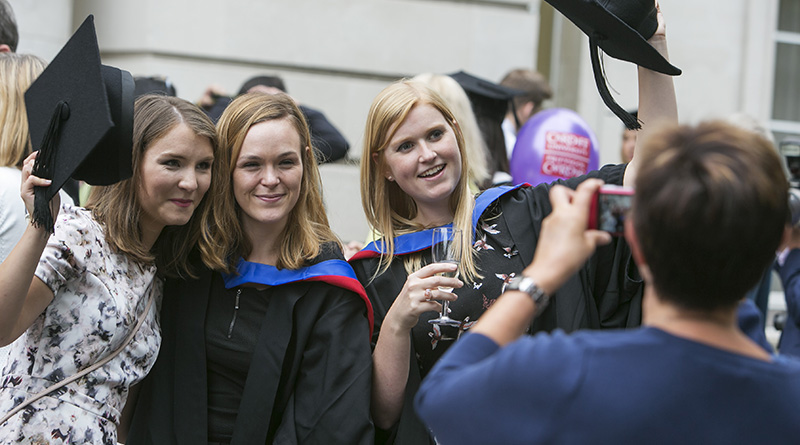 At around 6.00 pm on the 19th of July, after champagne, strawberries, congratulations and awards, the latest bunch of Cardiff University’s Journalism, Media and Cultural Studies BA graduates will begin to make their way away from departmental buildings back into Cardiff.

It will be, to be sure, a great day – as it was last year, when former Pro Vice Chancellor Pat Price and Honorary Fellow, Welsh international rugby referee Nigel Owens, emphasised the importance of education and the duty we all have, as those fortunate enough to be educated to a high level, to carry our knowledge and education out into the wider world.

At the School of Journalism, Media and Cultural Studies we hope that a graduating student’s experiences have been intellectual and character developing. I read some years ago that in theory, a university degree should, irrespective of the subject, ‘hone a person’s critical analysis skills while teaching them the value of acquiring expert knowledge in a particular area’.

The intention is that students, by the time they leave, will have attained the ability to research, write and critique according to highest academic standards. That they have the skills to work both independently and in groups. That they recognise the importance of intellectual objectivity, preparation, of meeting deadlines – and most importantly, that they leave University as citizens better prepared for a life in a media dominated world. These are the added values of a degree, beyond the classification, that a student should take into the world of work.

It’s an odd phrase, “world of work”- implying that life for the modern student has hitherto been unencumbered by the concept and that it is somehow different to anything they will have encountered before. In my experience, not only do a great many undergraduates manage a part time job to finance their studies, almost all of them are concerned about their career prospects from the moment they enrol for a degree.

So this article is a defence of the much maligned student who lives under the shadow of perpetual debt. I have long since stopped pointing out to incredulous lecture groups that when I was a student under a Thatcher government – a Thatcher government – all my fees were paid, I enjoyed a full grant and could claim housing benefit and unemployment benefit in the summer. As I write these words I can barely believe it myself.

Today’s scholar has no such security and a myriad of other uncertainties to contend with. In this sense, that the very best of them are responsible, socially aware and continuously creative is to be applauded.

The popular image of the drunken student with a traffic cone on his head continues to endure (for good reason, you may argue) but that reality tends to obscure the contribution made to the enrichment of local culture. Who knew that Cardiff’s Student Union works closely with Police and Community Together project and the Keep Cardiff Tidy and Community Regeneration Schemes?

The Union’s charitable ventures – which of course are similar to those in the majority of other institutions across the UK – illustrate my point.

Most recently students have worked with Cardiff Council Housing Services engaging with people at risk of homelessness, and in secondary schools providing additional one-on-one support to pupils who need extra help in various areas and with young people who have Asperger’s Syndrome developing their skills, confidence and access to Higher Education courses. The key is, I think, to understand that any good University has to be part of the Community it lives with and not apart from it.

This concept is more important than ever in the current climate of the continuing marketisation of higher education. Through no desire of their own students have, in the words of Priyamvada Gopal, been reframed as consumers buying private goods in the form of a degree. As this has happened the extent of recorded mental health problems among students has risen alarmingly. In August last year, a YouGov survey of British students found more than a quarter had experienced problems of some sort with depression and anxiety the most common reported ailments. As the report says, of those who suffer, 77% have depression-related problems, and 74% have anxiety related problems. When we pay tribute to those on graduation day for their academic achievements all too many parents will recognise the challenges that their children have faced whilst attaining their degree. Any academic will tell you that in certain cases a third class degree is as much an achievement of perseverance and skill as a first.

And standards have not fallen in the majority of Universities – students are actually getting better at what they do and more knowledgeable about how to do it. I write from general personal experience, of course, but my undergraduates today are more motivated, determined and demanding of my time than they were 10 years ago. The rise in university degree grades, research suggests, is not down to grade inflation but can be perhaps attributed to better prepared students, and dare I say it, better and more considered methods of teaching, learning and assessment.

Even with this being the case, it would be idiotic of me to deny that higher education is facing huge existential questions or that the problem of colossal student debt  is a factor in declining University applications  These issues are treated with utmost seriousness by the sector, which has the student experience at the heart of its strategic approach.

But that discussion is for another time. On graduation day, when we see those resplendent (often slightly embarrassed) offspring of very proud parents, it’s important to put their excellent achievements into context.