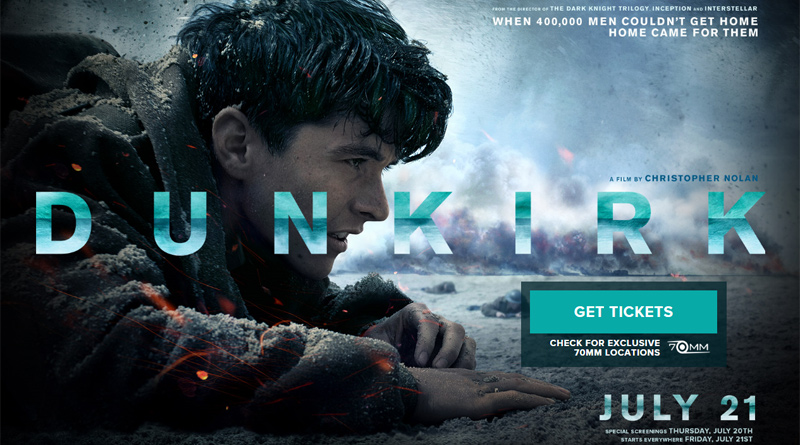 With the world Premiere of Christopher Nolan’s Blockbuster Dunkirk, it seems the right time look back at the events 77 years ago, between the dates of 26th May and 4th June, when the Dunkirk evacuation actually took place.

Because in the years since, Dunkirk has come to occupy, in Penny Summerfield’s words, “an iconic place in British culture”.

As the Nazi’s relentlessly progressed through the Netherlands, Belgium and France in May 1940 the British Expeditionary Force (BEF), along with sections of the French and Belgian armies were driven back to the beaches of Northern France. Trapped and at the mercy of imminent German attack on Dunkirk’s beaches, it seemed perfectly possible that if the allied forces were subjugated then Britain could not continue its fight against Hitler’s forces.

That some 336,000 troops were rescued in that week at the end of May and beginning of June is down entirely to the RAF and ‘Operation Dynamo’ which saw a combination of naval ships and civilian vessels come together to bring the men back across the channel. For the newly appointed Prime Minister, Winston Churchill, the events leading up to Dunkirk were a ‘colossal military disaster’  but at the same time the evacuation represented a ‘miracle of deliverance’. On 4th June he addressed the House of Commons in a 34 minute speech which is regularly cited to illustrate the fortitude of Churchill and the courage and resilience of the British nation as a whole. It was a speech, according to Roy Jenkins biography of Churchill, which matched the mood of the moment and inspired the nation. Churchill said:

Though Churchill did not shy away from the reality of Britain’s predicament (‘wars are not won by evacuations’) he used events at Dunkirk to propagandise and celebrate a proud history of an island race standing firm against invasion. Napoleon had been told of the ‘bitter weeds in England’ now, said Churchill, there were, “certainly a great many more of them since the British Expeditionary Force returned.” Almost at once a strategic defeat of catastrophic possibilities was being turned into an episode of determination and endurance. Yes, the forces had been sent packing, but now they were back demonstrating all the qualities which would outlive the menace of tyranny.  If all did their duty, if nothing was neglected, this island home would be able to’ ride out the storm of war, if necessary for years, if necessary alone’

In many ways, Dunkirk saw Britain celebrate its history and national identity as events happened: Here she was confronting a brutal foreign enemy, refusing to beaten, demonstrating unflinching resolve. The armada was defeated, so was Napoleon. Hitler would be, too.

As Phillip Knightley, points out, Churchill’s speech notwithstanding, whilst it would be incorrect to imagine that there was an organised campaign to change the evacuation into a victory, the British media certainly reacted to events in an overwhelmingly positive fashion.  The Pathe Newsreel which was distributed to cinemas across the country showed images of a proud BEF who, despite having experienced the ‘hell’ of Dunkirk, were still in formation, still grinning, with an ‘atmosphere of glory’ around them.  To the rousing strains of Land of Hope and Glory, the newsreel ends with smiling soldiers aboard a train and the stately narrator’s voice informing the audience that:

“The spirit and cause for which they fight has not gone. That can never be taken away from them….While these men live and breathe Britain is safe. The enemy will never pass”

For the novelist and playwright J.B. Priestley, whose Postscript programmes on the BBC attracted audiences in the region of 16 million listeners, Dunkirk was an example of Englishness at its finest. On June 5th he broadcast:

“I wonder how many of you feel as I do about this great Battle and evacuation of Dunkirk. The news of it came as a series of surprises and shocks, followed by equally astonishing new waves of hope. What strikes me about it is how typically English it is. Nothing, I feel, could be more English both in its beginning and its end, its folly and its grandeur. We have gone sadly wrong like this before, and here and now we must resolve never, never to do it again. What began as a miserable blunder, a catalogue of misfortunes ended as an epic of gallantry. We have a queer habit – and you can see it running through our history – of conjuring up such transformations”.

What we have here in essence is a distillation of Churchill’s speech refashioned for a broader audience. The unified and consistent message throughout the period in the immediate aftermath of the evacuation was hope and resilience. Britain’s (or England’s – the terms were used interchangeably) singularity, glorious past and traditions had to be believed in. The threat of German invasion was very real and the impossible had to be seen as possible.

Newspaper reports were similar in tone – the evacuation was result of divine providence and the soldiers were unbeatable. EA Montague wrote in the Guardian on 1st of June 1940 that as the soldiers arrived back “war correspondents watched with incredulous joy the happening of a miracle.” whilst the Daily Express of the 31st of May reported: “Tired, dirty, hungry they came back — unbeatable”  But it is perhaps the New York Times of  June 3rd which captures best the sense of history and occasion that the British government wanted to instil into its vulnerable population:

“So long as the English tongue survives, the word Dunkirk will be spoken with reverence. In that harbour, such a hell on earth as never blazed before, at the end of a lost battle, the rags and blemishes that had hidden the soul of democracy fell away. There, beaten but unconquered, in shining splendour, she faced the enemy, this shining thing in the souls of free men, which Hitler cannot command. It is in the great tradition of democracy. It is a future. It is victory.”

Of course, none of this sort of hyperbole and embellishment came close to capturing the reality of Dunkirk. Reports of desertion, anarchy and the 30,000 left behind were suppressed.  So too was the fact was that the returning troops were often filled with despair – bedraggled and disillusioned.  Cyril Ray of the Guardian, as with all of the war correspondents, covered the evacuation from point of return and not from Dunkirk itself. He later told David Jessel of troops “coming back in a shocking state….morale shot to ribbons, throwing their rifles away on the railway lines saying, ‘the buggers will be here tomorrow’.

But Ray did not report that reality. Because the censors would not have allowed it and because there was a very effective system of news management in place to make sure that he didn’t.

There were no British war reporters at all in France at the time and as Clive Ponting indicates, in this time of national crisis they were simply expected to behave as if they were an arm of government. On May 28th, General Mason-Macfarlane, the head of military intelligence told selected journalists that

“I’m afraid there is going to be a considerable shock for the British public. It is your duty to act as shock-absorbers, so I have prepared … a statement that can be published, subject to censorship.”

So the press absorbed the shock of Dunkirk in the only way it could – by emphasising the positive. In an attempt to understand the situation let’s remember that the journalists were, at this time and as citizens, very much a part of this very real fight for survival and not objective reporters of the war. To some, like Tom Hopkinson of the Picture Post, his task as an editor in this situation was not to tell the British people the truth. Hopkinson felt that there was something more important than telling the truth. Perhaps history has proved him right.

A version of this article appeared in the Conversation

Dealing with graphic content is a moral minefield for journalists

Reporting the battle of the Somme – 100 years on.