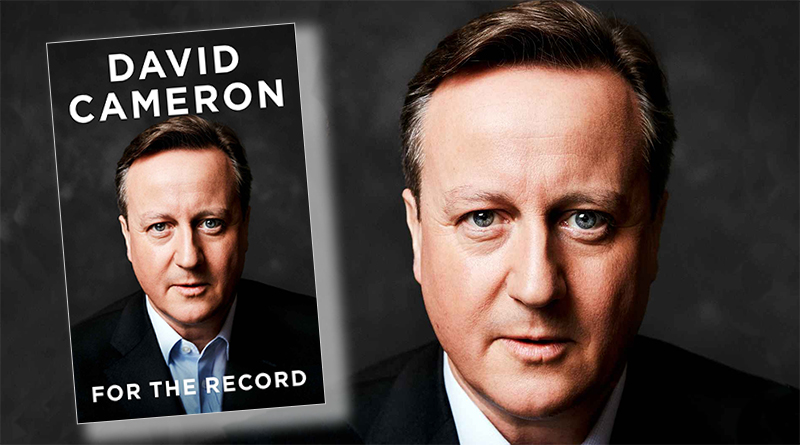 Thus far conspicuous by his absence from the Brexit debacle that some would say is partially a result of his decision to call a referendum in the first place,  former Prime Minister David Cameron has returned to the limelight this week with the publication (and recent serialisation in the Times newspapers) of his memoirs.

Reportedly paid £800,000 by publishers HarperCollins, Cameron’s 752 page autobiography, soberly titled For the Record, takes us through his career until his resignation on the morning after the referendum result in 2016.

As a taster, we were able to read in the Times of Cameron’s withering assessment of former ally Boris Johnson as mendacious, calculating and selfish (who knew?), learn that Michael Gove was a  “foam-flecked Faragist” warning untruthfully that “the entire Turkish population was about to come to Britain” and that he has no regrets about calling the referendum, which he saw as essential and unavoidable.

Away from politics, Cameron writes movingly about the life and death of his son Ivan, who passed away when he was just six years old. Cameron’s love for Ivan, who suffered from Ohtahara syndrome and regular heart seizures, shines through “I loved the Boy with the utmost love of which my soul is capable”, he writes. Also abundantly clear is Cameron’s affection and admiration for his wife, Samantha.

So, this week there has been a flurry of publicity to promote the memoir. As well as the serialisations, which were picked and pored over by rival newspapers and current affairs programmes, there have been interviews with Tom Bradby on ITV, the beginning of the BBC series the Cameron Years and an interview with Radio 4’s John Humphrys, which coincidentally marked the end of the interviewer’s time on the flagship Today radio programme.

It might well be that such publicity is needed. The Guardian recently reported that in terms of pre orders the book was ranking as low as 335 in the Amazon charts. This is tempered, though, by the view of Waterstone’s Chief executive, James Daunt, who stated in the same Guardian feature that early signs were For the Record was going to be “really popular” and a “really big publishing event”.

Whatever happens, the book is going to have perform extraordinarily well in order to get anywhere near the initial sales of Tony Blairs’ A Journey.  In 2010, the former Labour PM’s memoir became Waterstone’s fastest selling autobiography ever, also topping the Amazon.co.uk’s best-seller list.

The plain fact is that the idea of political memoir – where politicians provide their own unchallenged verdict on their lives and careers – is almost as old as the business of politics itself and as Professor George Egerton has written in his anthology of essays on political memory , it’s absolutely expected that leaders will produce accounts of their time in power. Such memoirs continue to sell in relatively large numbers, constituting the most popular form of historic literature. They offer, suggests Egerton, major revelations, insight and high class gossip.

That’s the hope, anyway. But there is always the risk that efforts to combine accounts of high office with the minutiae of everyday life will inevitably irritate and embarrass. Reviews of Blair’s memoirs pointed to “the clichés and pop psychology [that] will make you grimace, but Tony Blair’s memoir is also remarkably candid – except when it comes to Iraq.”

The problem seemed to be overfamiliarity where it wasn’t necessary and a lack of candour where it was. Indeed, one passage of A Journey was nominated for the Literary Review magazine’s bad sex award. Look away now, readers of a sensitive disposition:

“That night she [Cherie] cradled me in her arms and soothed me; told me what I needed to be told; strengthened me … On that night of 12 May 1994 I needed that love [she] gave me, selfishly. I devoured it to give me strength. I was an animal following my instinct … “

Yet surely this is preferable to the many memoirs which barely acknowledge a life outside of office. For various reasons, I have over the years spent far too long in the company of Margaret Thatcher’s Downing Street Years which, in its 900 pages, is a monumentally tedious read which nonetheless does capture her single minded approach to government and commitment to her own brilliance.

The most popular form of political memoir is of course the diary, and in recent years there have been two outstanding exponents of the form who have found both critical and popular acclaim.

The volumes of writing by former Tory MP and Thatcher devotee Alan Clark were so salacious, candid and shocking that they were turned into a comedy drama by the BBC. Here we had an openly fascistic sex maniac reporting from the front line of British Conservative politics during the turbulent years of unbroken power in the 1980’s. If Thatcher couldn’t tell us how she really felt, then Clark at least provided a vicarious, interpretative spin around the decadence of a privileged Tory life.

On the other side of the coin is Tony Benn, whose exhaustive accounts of his 40 years on the political frontlines from 1950 -90 were finally collected together in 2005. Here was a man devoted to socialism’s cause recording every scintilla of detail accumulated from a complete immersion in what he saw as an unending fight for equality. To read the diary entries from when he was at the heart of politics in the 1960’s and 70’s, particularly, is to be transported back to another age. Benn manages to make the business of politics diminish. On many occasions he portrays the workings of high office as nothing more than a series of events characterised by imagined prejudices, alliances and petty intrigue.

What diaries do, by their nature, is invite the reader to imagine themselves immersed in events as they happened. The appeal for politicians is in that cosmetic closeness but also in the illusion that accounts have been constructed as they happened and therefore are untainted by the hazards of memory. Diaries feel more authentic, more believable. They are not.

All political memoirs are problematic, though. What is the difference between truth and the personal interpretation of factual events? What about bias, individual circumstance, self – aggrandisement, self-interest? It is dangerous, if not inherently wrong to see political autobiographies as having any objective historical merit whatsoever.

Yet they serve a variety of purposes from the author’s point of view, not least among them the opportunity to earn a great deal of money. Then there’s the opportunity to put their side of the argument forward without the indignity of an interviewer disputing any of the finer points.

That old adage that political careers end in failure needs to be rethought.

All political careers end in memoirs.

A seven-horse race? How minor parties are being squeezed out of campaign coverage