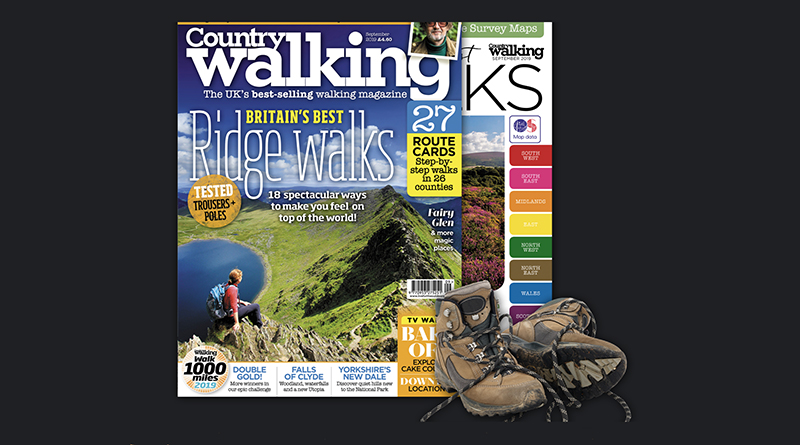 It’s a precarious time to be in print media. Circulation seems to be in inexorable decline, editorial teams and budgets are shrinking and no matter how good your publication, readers simply aren’t browsing the shelves of newsagents in the way they once did.

The challenge for Guy Procter, when he became editor of Country Walking in 2016, was to find a new way to connect with potential readers.

“Country Walking had been in sales decline for 14 years and that didn’t appear to be the fault of the magazine,” explains Guy. “It was a beautiful product, lovingly produced and expertly written. It was a result of the flight from the newsstand and we needed a way to get it into readers’ hands again.”

The big challenge was to overcome walking’s image problem: one of bobble hats and red socks, Thermos flasks and beards. “We needed something that people would make a noise about and would allow them to add to their social capital,” says Guy.

While walking might seem a million miles from the digital start ups of Silicon Valley, tight budgets meant the editorial team were pushed to find a Minimal Viable Product (MVP) approach: a low-cost way to test ideas and develop iteratively, used by digital start-ups. They opted to trial a simple challenge: to get readers to sign up to walking 1000 miles in a year. It was launched it via a Facebook group.

“We knew that walking would make you feel better and would benefit you from the day you started, so we came up with Walk 1000 Miles,” says Guy. “It took six months to get the first thousand people but they were all having a marvellous time. They were radioactive in their enthusiasm for what it was doing and the new friends they were making. That just set the whole thing alight.”

The editorial team quickly learned what this group of early adopters wanted from this challenge. Instead of trying to monetise and up-sell from the start, these superfans were treated as a pioneer community and, unprompted, they started to ask for merchandising such as clothing, badges and medals for successful finishers.

The Facebook page now has over 30,000 members and has opened a host of other revenue opportunities.

“A lot of the people that we are bringing into this world have never considered themselves to be walkers before,” says Guy.

“They are right at the ground floor. We have got people who want to buy their first pair of walking boots and their first rucksack and that’s exactly where advertisers really think the opportunities are, because they can form brand new relationships with them.

“It has given us a fantastic new story to go out to the trade with and advertisers are crying out for new ways to get into the minds of readers.”

Sponsorship from companies such as Rohan, Scarpa, Fuji Film and Slimming World is now generating a ‘six-figure revenue’, but its the way readers have become evangelists for walking that has helped to deliver an impressive 34% sales lift.

Central to that was building a shared sense of the transformative power of walking and the outdoors. “As people came to trust the environment they felt more able to open up and show themselves at their most vulnerable,” explains Guy. “There were showing before and after pictures and that exponentially increased the interaction in the group.

“People realised that not only could they help themselves through walking but they could help other people too. People who have felt quite isolated and alone suddenly came to find themselves to be radiantly useful and lovely people and that’s a transformative feeling. That turned those early settlers into the most powerful marketing team that we could have never recruited.”

People started asking for posters they could put up in village halls, schools and businesses or cards they could hand to other walkers in the park. So the editorial team developed a range of content that could be easily shared.

“They love a good meme,” says Guy. “The best ones reflects well on the people who are sharing them. So I spent a lot of time researching the health benefits of walking and we came up with the ten different things that an hour a day of walking can do for you.”

The Country Walking team produced a range of shareable content.

Guy’s as evangelical as his readers have become and lists off reams of medical research into the benefits of walking: “It can reduce your risk of heart disease by 70 percent… half your risk of stroke, diabetes and depression”. It was a message that people were keen to pass on.

His dedication to the project has driven its success, but he’s had to radically change the way he works. “I now spend half my time doing Walk 1000 Mile stuff, whether it’s liking posts, writing comments, producing pages, harvesting content for the magazine, talking to partners, editing the videos, or coming up with memes. It’s a massive part of my job. I’m sure I’ve written the least number of features of any previous editor of Country Walking, but I think this is the most potent outboard engine I can drop into the water.

“And when I think about how much of a difference walking can make to so many people’s lives, that’s worth getting out of bed for.”

Powerful human stories of transformation through walking have seeped into the magazine. At the start of the project they began with a double page spread dedicated to stories from readers on the challenge. Walk 1000 Miles now constitutes six pages each issue. Deciding what should go in and what should be left out is now the toughest part of Guy’s job.

“We’ve just had a story about a woman who really felt that walking had saved her life. She said: ‘I’m divorced, 48 years old and I look like a granny’. She was 18 stone and size 24 when she hooked up with Walk 1000 Miles. Now she’s cycling and fell running, looks fantastic, has lost 8 stone and she is psychologically really resilient.”

And stories like this have given the editorial team ways to challenge the middle class ‘pale, male and stale’ image of walking. “A lot of the pride in the group comes from people saying ‘I didn’t think I was a walker, I wasn’t good enough, I was too fat, I couldn’t read a map but actually I’m OK’.

“The mainstream media thinks we’re all Nuts In May, bobble hat-wearing walkers… so we said to our readers show us a picture of yourself looking not like that. I had hundreds of pictures of great, bearded truckers, tattoed vixens, a black woman in her 70s who fell runs and it was fantastic. It’s really fizzed up our sense of our own project.”

“The most important thing on social media is to be authentic and frank,” explains Guy. “ At the start I spent a lot of the time doing what I thought were witty and sophisticated social media stuff and then I realised people were far more responsive to things that are quite sentimental and authentic. So, if I’m doing something like ‘five things that I love about Autumn’ I make one of them funny but make the rest identifiable.”

A key measure of success is that this project has allowed Country Walking to protect its editorial budget and staffing levels at a time when other teams are having to deal with cuts. So is this an approach that any editor could replicate? The key, says Guy, is to find something as close to your mission as possible. Keep it simple and make it easy for the reader to get involved and get feedback.

“In the past, I’ve come up with treasure hunts and complex mechanics for competitions and think readers will really go for it, but the uptake has been a fraction of what I hoped for. But come up with ‘show me a picture of your dog’ and I am deluged. People are busy, they don’t want you to fill hours of their life. You need to nudge them in the direction of something that will pay them back in huge ways.”

Mirror, Mirror off the wall…

Public Relations and the Arts