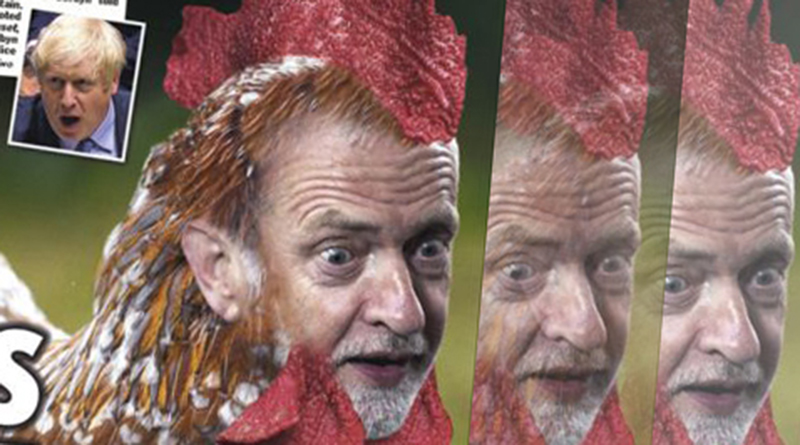 In the middle of a week in Westminster politics where Prime Minister Boris  Johnson has lost three key votes, overseen the expulsion of 21 of his Conservative Party colleagues  and, by general consensus, partaken in a Prime Ministers Questions characterised by cheap shots and obfuscation, the Sun newspaper has chosen to lead on its front pages not with withering condemnation of the PM’s shocking displays of arrogance and bluster but with the head of the leader of the opposition, Jeremy Corbyn, superimposed on to the body of a chicken. It is tiresome, offensive, ridiculous but entirely to be expected and it’s useful to see the attacks on him (by the Sun, Daily Telegraph and Daily Mail in particular) as just the latest in a long line of attempts to ram home to their readership, and by extension the electorate, Corbyn’s complete unsuitability for high office.

As I’ve written elsewhere , on the eve of polling day in the 2017 General Election, the first 13 pages of the Daily Mail were intended to provoke fear and loathing. On page one, Corbyn was pictured alongside Diane Abbot and John McDonnell as an ‘apologist for terror’ whilst inside the paper the attempts to link with him with terrorism both past and present were meant to communicate his contempt for Britain and British values.

The Sun’s editorial was equally as damning encapsulating two years of anti Corbyn sentiment with this warning aimed at potential Labour voters:
A generation after the end of the Soviet Union, the dismantling of the Berlin Wall and the collapse of almost every ruinous and oppressive hard-Left regime worldwide, you would be helping to establish a new one, right here in Britain. It would be the gravest mistake this country has ever made.

In 2018 it was the Sun that “broke” the Corbyn as communist story, leading on its front page of the 15th of February with the splash CORBYN AND THE COMMIE SPY, alleging that the Labour leader had met a Czech spy during the Cold War. Corbyn, said the Sun referring to “secret files” it had access to, briefed “the evil regime of a clampdown by British intelligence” and displayed negativity toward the US while supporting Soviet peace initiatives.

Two days later, the Mail’s front page screamed CORBYN ‘THE COLLABORATOR whilst the accompanying narrative claimed that according to former Czech spy Jan Sarkocy, Corbyn was a paid informant of the Czech secret police.

The Labour Party’s reaction to all this was pretty standard. This was a “ridiculous smear” spokespeople said, and though Corbyn had met a Czechoslovakian diplomat in the 1980s, he “neither had nor offered any privileged information”. Eventually, the story fizzled and died, but it fed into the steady drip, drip of anti Corbyn narratives.

But as the story developed, Corbyn took the highly unusual step of recording a personal video message in which he explicitly referred to the Sun, the Mail, the Telegraph and the Express whilst refuting all claims against him. All these allegations did, said Corbyn, was to illustrate how worried these newspapers were about the prospect of a Labour government. They had reason to be, he said: “we’ve got news for them – change is coming.”

These intentions – some would say direct threats – once again illustrated Corbyn’s long standing commitment to media reform. During the Labour leadership contest in 2015 he said: ‘A society in which 70% of UK newspaper circulation is controlled by 3 wealthy families is clearly unfair and undemocratic”. Just after the video was released, Labour “insiders” told the Huffington Post that when in government they would consider media regulation and the plurality of media ownership. And whether or not you see Corbyn’ retaliation as an attack on the free press or completely justified, the content of his address does get to the heart of why the Tory papers go after him with such frequency and vehemence. Of course, much has been written about the historic vilification of Labour leaders at the hands of the Sun et al.

Or when the Daily ran its infamous “Man who hated Britain” story about Ed’s father Ralph? And don’t forget that in the early days of the phone-hacking scandal it was Miliband, in an interview with the Observer, who spoke out against Rupert Murdoch’s influence. He said:

I think it’s unhealthy because that amount of power in one person’s hands has clearly led to abuses of power within his organisation. If you want to minimise the abuses of power then that kind of concentration of power is frankly quite dangerous.

Roy Greenslade in his excellent Guardian media blog made the point that every leader with the notable exception of Tony Blair has suffered at the hands of the Tory press. He singles out Gordon Brown, Neil Kinnock and Michael Foot as being particularly harshly treated.

It is the vilification of Foot that sticks in my mind. Mercilessly lampooned for his decision to wear a donkey jacket to the Cenotaph on Remembrance Day (when he wore nothing of the sort – it was, in fact, a smart coat chosen by his wife Jill) this most principled of leaders was completely unsuited to running an election campaign against the sophisticated Thatcher media machine and a particularly feral Kelvin Mackenzie-edited Sun newspaper, which asked, incredulously: “Do you seriously want this old man to run Britain?”

For many, it was the constant attacks on Neil Kinnock from 1983 up until the election defeat of 1992 which seriously undermined his credibility as a potential PM. James Thomas in his book “Popular Newspapers, the Labour Party and British Politics” refers to Roy Hattersley’s contention that the tabloids “destroyed” Kinnock’s hopes of being prime minister and ensured an “extraordinary warped public perception of him”.

Perhaps there are parallels between Corbyn and Kinnock when we consider the refusal of the Sun, in particular, to take Kinnock seriously. In the run up to the 1992 election the Sun asked a psychic to contact dead celebrities and ask them who they would vote for. Under the headline: “WHY I’M BACKING KINNOCK, BY STALIN” the readers learned that Uncle Joe was joined by comrades Mao and Trotsky.

Returning to Michael Foot let’s not forget that in 1995 the late MP for Ebbw Vale successfully sued the Sunday Times (the broadsheet sister paper of the Sun) for its allegation that he was Soviet agent. In 1994, the newspaper ran a three-page article under the leader “KGB: Michael Foot was our agent”. Foot was alleged to have received cash payments from the Russians and also, Like Corbyn, had a codename (Boot). In the event, the Sunday Times had to pay damages, costs and provide assurance that it had never intended to imply he’d ever been a spy.

Despite similarities, Corbyn is different animal to Foot and he clearly believes that the perceived power of the mainstream press is on the wane. The fact that he chose to record a video message in 2018 rather than be interviewed indicates that he is confident and unwilling to ‘play the media game’ in the way that his contemporaries do. His approach is so unorthodox that media bemusement in so many cases is manifest in hostility.

In this way, though the comparison is perhaps odious, Corbyn has more in common with Donald Trump than he does with any other politician. Both view the conventional media with distrust and choose instead to communicate via social media as far as is possible.

And, with front pages such as the “dangerous chicken” who can blame him?

NOTE: This post relies to some degree on information included in previous pieces published on this site.