The latest in a series of controversial advertising campaigns on behalf of charities made the news headlines last week. The pancreatic cancer UK charity ran a campaign in which genuine sufferers of the disease stated to camera that they ‘wished I had testicular cancer’ and ‘I wish I had breast cancer’. The implication was that those afflictions were preferable to the particularly deadly pancreatic form. Twitter, the go to forum for any journalist seeking to gauge the mood of the nation, was particularly aghast at the inference that one type of cancer was desirable to another and the Daily Mail duly printed the sentiments expressed online. The campaign was ‘offensive, repugnant and hurtful to all cancer victims and their families’ as well as being ‘insensitive to those with ‘breast cancer and who have lost loved ones to it’. Quoted in the Mirror, Chris Askew, Chief Executive of Breakthrough Breast Cancer charity, said: “we strongly dispute any message which suggests that one type of cancer is preferable to another.’

The news, as of February 26th, is that the  ASA (Advertising Standards Authority) has received 118 complaints about the campaign from members of the public. It will judge later whether the charity has  has breached its code on the basis that it caused the public “harm” and “offence”.

Shock advertising of this sort is not new to charities. Children’s welfare organisation Bernardo’s has form in this area. In 1999 a campaign of theirs used images of very young babies appearing to inject heroin whilst in 2003 they ran poster campaigns depicting a new born baby with a cockroach emerging from its mouth. The intention was to show the potentially miserable and alarming futures faced by vulnerable and disadvantaged young people from the start of their lives. And none could dispute the arresting and disturbing potency of the imagery. Moving forward, in 2012 St John’s ambulance showed the journey of a cancer sufferer’s life from diagnosis to recovery only to see him, through his daughter’s eyes, die from an unrelated choking accident at a barbecue. The message was that knowledge of first aid could save 140,000 lives each year – the same number who die from cancer. It became, according to the Guardian, the 10th most complained about television advertisement of the year.

It was because of cases such as the above that in November last year the ASA  issued a statement saying that they were looking into the nature of complaints they received about such tactics. Clearly, charities have been allowed a certain amount of ‘leeway’ in using content some may consider offensive partly because of the seriousness of the subject matter and the importance of raising awareness. In the last few years, though, concerns have been raised about the increase in disturbing and emotive imagery to elicit response. As result the ASA is going to be putting more checks and balances in place when assessing complaints about charity and public service ads.

So why do charities resort to shock tactics? The answer is simple. The more disturbing or emotive the message, the more likely it is to bring forth response. And, whilst an audience may express disgust or revulsion, that does not necessarily translate into a lack of support for a particular cause. Lindsay Gormley, assistant director of marketing at Bernardo’s told Third Sector, ‘Barnardo’s has a history of hard-hitting advertising that brings to life in a powerful and emotional way….. For the vast majority of viewers the messages are clear, and as a result we see a substantial increase in people wanting to support Barnardo’s work.’ Team Darwin, the agency behind, the ‘I wish I had breast cancer’ campaign argue, perhaps predictably, that other charities should be emboldened to follow their lead.  According to chief creative Greg Phitidis: within 48 hours of the campaign breaking, global news channels were advising on signs and symptoms. And our client has been invited to Westminster to discuss research and funding with MPs, something that would never have happened if we’d taken the edge off the campaign.’

The link between Team Darwin’s campaign and parliamentary involvement in this instance is demonstrably undeniable. However, it would be foolish not acknowledge that in certain cases the danger is that the shock value of an ad becomes the currency of debate rather than the issue it is trying promote. In 2011 the Save the Congo charity posted a frankly horrific film on line which transposed real events that had taken place in the Congo to the idyllic Cotswolds countryside. Appropriately titled Unwatchable, the film sparked the revulsion it was intended to provoke and the debate around its content occurred in the national press and radio 4. Journalist Jane Martinison wrote, after watching Unwatchable, I will sign the petition to make mobile phone manufacturers more transparent about their raw materials and I urge you to do so too. But watch the film? Isn’t it enough to realise that during its transmission five men, women and children were raped in the Congo?

In a related but separate debate later that year a forum at the LSE debated the context of communicating ‘distant suffering’ and expressed concern that aid agencies were on occasion compromising the dignity of people. Quoted in PR week the director of communications at the Disasters Emergency Committee, Leigh Danes, said that . ‘For us, there should always be a red line about respect and dignity,’ said Daynes. ‘It does not mean we can’t be truthful.

In the case of the St John’s ambulance campaign, the point was to raise awareness and spur the public into action. In these cases, there is some concern that shock advertising, whilst improving profile, can alienate the intended audience. Cancer Research UK’s  head of health campaigns and marketing Abigail Brown told Marketing Week  that Cancer Research UK explored a range of options when looking at how best to encourage people to visit their GP upon discovering an early symptom of cancer.“We found that using a hard-hitting approach in that instance didn’t really work because people are very afraid,” says Brown. “If someone thinks they might have cancer or has a symptom, they’re likely to try to push it out of their mind.”

For most charities though, the bottom line is raising enough money to continue to operate effectively. Meeting the needs of its client base, to  borrow a term from the business world, can depend on publicity generated. In an ever crowded media landscape the spaces in which to capture attention may be various, but so then is the pressure to stand out and be noticed in the 24/7 culture of fleeting images and rolling news. In 2011 Jane Mayo of  ActionAid told the Guardian that when the charity toned down its imagery of extreme poverty in the face of criticism, campaigning became “unsuccessful from a fundraising viewpoint” For Greg Phitidis, the man behind ‘I wish I had breast cancer’, the UK is suffering from cause fatigue and the ‘bold approach’ is the only way forward. 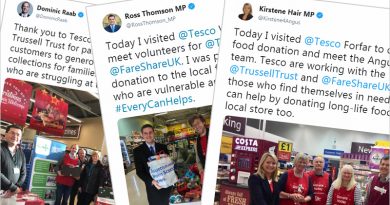 Poverty that shames a nation