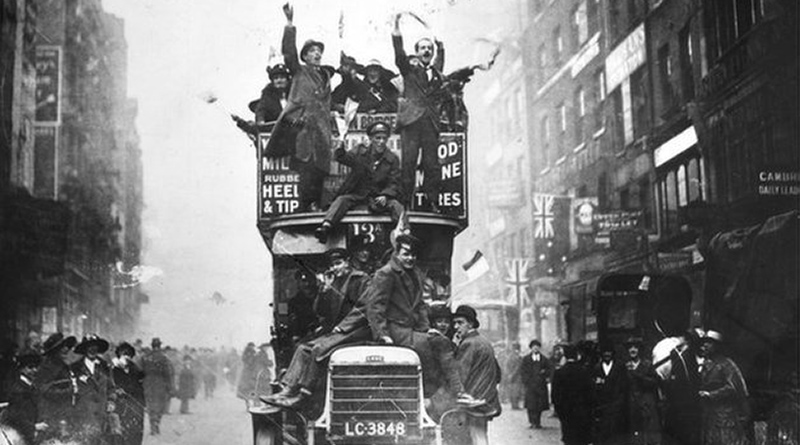 Deep in the forest of Compiègne, about 40 miles north of Paris and aboard a carriage of a private train belonging to the French Supreme allied commander, Marshall Ferdinand Foch, representatives of France, Great Britain and Germany met to sign the armistice which put an end to the unparalleled slaughter.

And what slaughter it was. Although it is not possible to be completely accurate when accounting for the casualties of World War One, its estimated that the fighting claimed almost 7 million civilian lives and 10 million military personnel. Russia alone suffered a staggering 1.7 million deaths and 4.9 million wounded. In four years Britain endured 658,700 fatalities, 2,032,150 wounded and 359,150 men missing in action. This adds up to total of 3,050,000 casualties.

These figures are astonishing and difficult, for me at least, to comprehend. Millions and millions of lives lost. We don’t really understand what a million is, do we? There haven’t even been a million days since the birth of Christ.

World War One devastated Britain and changed it forever. Yet, for much of the conflict, the horror of its progress was kept from the public.

During the war, publishing information that was calculated to be indirectly or directly of use to the enemy became an offence and was punishable in a court of law. This included any description of war and any news that was likely to cause any conflict between the public and military authorities.

Reporters – and there were only five accredited war correspondents – operated under the intense scrutiny of the high command. Although they were treated well – given uniforms, rank and housed in the same French chateaux as their military superiors – they were forbidden from (without express permission) writing about where they were, from referring to regiments, and from writing about soldiers other than commanders-in-chief.

Indeed, in an effort to ensure that nothing at all be published that may endanger the war effort, their every move was accounted for. They were accompanied at all times by army censors who had the authority to use chemicals to search for the use of invisible ink in dispatches. The point is: they were there to provide stories of derring do, aid recruitment and keep the high command from criticism.

Even if reporters had wished to “tell the truth” and their copy had made it past the censors, then the editors and proprietors back home would have ensured that their writing did not see the light of day. Lord Northcliffe, owner of the Times and Daily Mail ended the war as director of propaganda in enemy countries, while Lord Beaverbrook, later the owner of Express newspapers, was minister of information. Robert Donald, editor of the Daily Chronicle, was director of propaganda in neutral countries. This was hardly an environment where truth and objectivity were likely to flourish.

Imagine how the mothers, wives and daughters at home would have felt reading of the Battle of the Somme where nearly 20,000 men died on the first day:

Good progress into enemy territory. British troops were said to have fought most gallantly and we have taken many prisoners. So far the day is going well for Great Britain and France.

But when the war did finally end the newspapers did seek to communicate the relief and sheer joy of the British populace. The Daily Mirror of November 12th stated:

London went wild with delight when the great news came through yesterday. Bells burst forth into joyful chimes, maroons were exploded, bands paraded the streets followed by cheering crowds of soldiers and civilians and London generally gave itself up wholeheartedly to rejoicing…..Business was suspended generally, shops and houses were decorated with flags, and the people everywhere were delirious with delight

The Guardian of the same day proclaimed that London had, “let itself go”
While in Manchester, the first impulse first seemed to be to “throw open the windows. It was as though people had heard the news and wanted to breathe it” but soon those first thoughts which “lay so near to tears were swept away in a rush of tramping feet and the choruses of songs.”

And of what of Wales? How did the Western Mail greet the armistice? Well, if you were go purely by the front page on November 12th then you would be hard pushed to find any reference at all. The biggest item, in a broadsheet of closely typed text dealing with marriages, deaths, the sale of dairy cows and countless other advertisements, is notice of the clearance sale of Fur coats from James Howell! Let’s not be too surprised at this, though – to have a front page dominated by ads was common to most newspapers. Then, as now, their revenue was vital.

It’s on page 3 that the end of hostilities is properly noted. Two large pictures portray the thronging crowds outside Cardiff City Hall and the Mail’s offices in St Mary’s Street. These are accompanied by a close chronology of events during the four years of struggle and picture portraits of the King, Lloyd George and other “FAMOUS MEN WHO HELPED TO WIN THE WAR.”

Then we are onto the celebrations across Wales as headlines proclaim “THE GREATEST OF ALL WARS HAS ENDED” and “WILD JOY – DAY SCENES with “STIRRING INCIDENTS ACROSS SOUTH WALES”. We learn in detail of the experiences of the Welsh Guards and the “nearly 40” Welshmen who received the Victoria Cross, the highest military honour.

The day’s editorial is poignant and circumspect:

“a feeling of devout thankfulness at the cessation of hostilities possesses the nation. The stress, the strain, the anxieties of four years and more – a period of peril and strife without precedent in our history – have given place to sensations of relief and joy equally without parallel. From the monarch to the lowliest peasant, the sensation is the same: as we have been united in conflict and deprivation, so we are united in rejoicing.”

As we honour the dead of all conflicts this coming Sunday it is especially vital that we continue to remember World War One. Its veterans are all gone now, but we have the testimonies and the stories, the poetry and the pictures. The majority of us, in our relatively comfortable lives, are preoccupied by the inconsequential and the truly unimportant. It is only through the knowledge of our history that we can appreciate that good fortune.

Let’s end, though, with a wonderfully humane and optimistic editorial of the Guardian on November 12th 1918:

By the hundred thousand, young men have died for the hope of a better world. They have opened for us the way. If, as a people, we can be wise and tolerant and just in peace as we have been resolute in war, we shall build them the memorial that they have earned in the form of a world set free from military force, national tyrannies and class oppressions, for the pursuit of a wider justice in the spirit of a deeper and more human religion.

Little was the writer to know, of course, that in little more than 20 years the world’s young men and women would again be fighting to free the world from “military force, national tyrannies and class oppressions”. Plus ca change.

ISIL’s propaganda and the road to war